Asia’s biggest bulk wine fair will be held in Yantai

Asia’s biggest bulk wine fair will be held in Yantai

Yantai is known as China’s City of Wine and the country’s most important port of entry for bulk wine.

More than 80% of the bulk wine that enters China each year does so via the port of Yantai. 135 million liters out of China’s overall volume of 170 million liters entered via Yantai. *according to official data corresponding to the year-on-year period as of November 30th.

Yantai is China’s most important city for the bulk wine industry but also has the reputation of being the most beautiful beach in northern China. It is one of the most excellent natural bathing beaches in China.

China Central Television (CCTV) recognized Yantai as the most “Charming City of China.” Although Yantai is not a metropolis like Beijing and Shanghai, it has its own unique charm. Adding to the draw of local natural resources, the picturesque scenery in and around the city has earned the area acclaim by the United Nations, which lists it as one of the most habitable places in the world. Undulating hills rise above the area’s many rivers, and are framed by beaches and neighboring islands.

The south side of the seaside road is lined with a European-style building. It has a natural atmosphere and a rich European style. It is an ideal place for leisure and holiday destination. 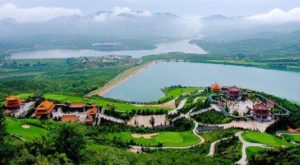 On the coming 30th and 31st of May, the World Bulk Wine Exhibition Asia will reunite the main international wineries alongside important Asian importers. This is a meeting for business, but also for the analysis and debate about new trends from the sector.

There are already limited places in order to participate as exhibitor in WBWE Asia. Those producers and companies from the sector that wish to participate in Asia’s major bulk wine fair, can reserve their space HERE.